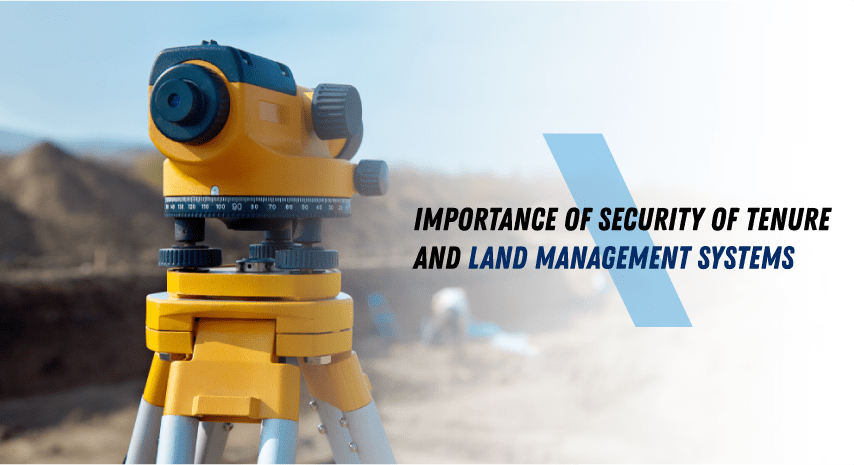 Around the world, data suggests that less than sixty countries actually have accurate and updated national land registries with verifiable owner data and precisely mapped boundaries. Additionally, many countries that currently have systems for tenure-recording could use a lot of improvement in this regard.

Why Stress the Importance of Security of Tenure

Let us consider the situation of land tenure-recording in three East African countries located close to each other – Ethiopia, Kenya, and Rwanda. Doing so will help us understand the importance of security of tenure. In Ethiopia, a majority of the population lives in rural areas and only a fourth of those people have any kind of land record. Moreover, most of the land is not spatially mapped.

Almost 47 million people in Kenya face cultural differences that have also led to conflicts in land ownership and rights. The Maasai and Samburu communities lack the means to prove that the lands they have been living on for generations belong to them.

In addition to that, the rapid development of cities are disturbing previous patterns and causing problems for rural dwellers already in the area. A few examples include the hindrance to the local womens’ route to their wells and herding routes used by the villagers for their livestock since many years due to privately held land blocking access to those routes. These issues along with the worsening water shortage are causing the conflict in Kenya.

Finally, Rwanda, a country of around 14 million people, may have handled the mapping and compiling more than 12 million land areas. However, there still are millions of land sections that remain unmapped and untitled, and the government also needs to make sure that any changes in land ownership are also recorded officially.

Governments need to understand their country’s requirements in terms of land tenure security and identify the best land management systems that can serve those needs. Each has their own specific needs that may prove challenging to implement, however.

For instance, the Maasai in Kenya “map” their boundaries with the help of geographic features. They use parameters and directions in a different way; their lands may extend to a particular mountain or they may describe a river as the boundary between two lands.

This is where technology that successfully accommodates such systems can really make a difference, by processing such rough estimates into sketches atop UAV images and processing them into metric maps. The countries we have discussed here are sure to find the best land management systems useful, such as the use of UAV-collected data and drones to streamline land surveying. GPS equipment for land measurement work rapidly to deploy and record images with accuracy.

Although data suggests that countries like Rwanda still face conflicts when it comes to boundary accuracy, especially because the area of the land plays an important role in deciding how much agricultural input will be received.

Additionally, the registration process of land use rights needs some work all over the country, whereas local governments could use some help in the form of cadastral information in terms of land use that stays connected to the national database so that updates are carried out to the national master plan as well.

The government’s perspective may differ: while improving the precision of cadastral information is considered necessary, it is not at the top of their list of priorities, they would rather gain the insights and use them instead alongside data of other fields like infrastructure, land use, etc.

Due to swift urbanization, they feel the need of a bird’s eye-view of the entire area so that they can take appropriate action. For this reason, they are also willing to increase the investment in the best land management systems that modern technology has to offer.

SInce all of these three countries have land holders with small plots and constrained resources, there is also a need for tools and GPS equipment for land measurement that acquires data as accurately as possible in order to provide improved land tenure. This technology can surely provide assistance even with a communal approach like that of the Maasai.