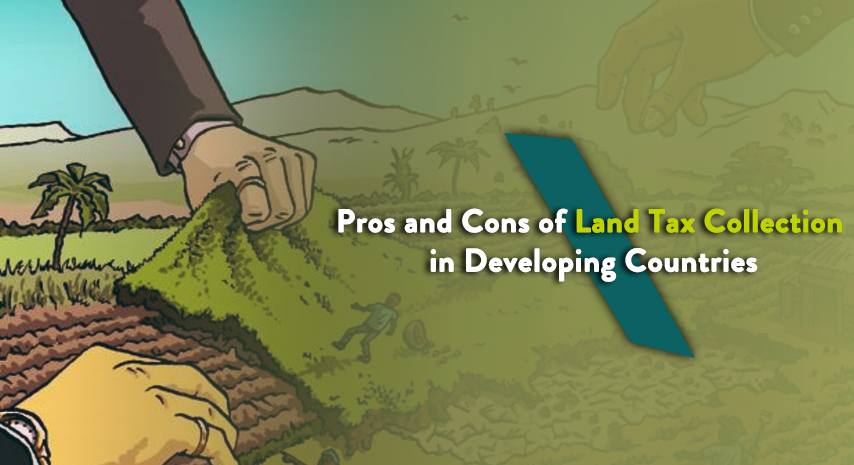 Property tax (PT) is considered by policy makers as a ‘good’ tax in comparison with other taxes like income tax. However, it contributes very little to the GDP in developing countries at present, with average revenues of below one percent.

Such lack of contribution has led to an interest among policy makers to take steps in order to boost its share in GDP, especially in African countries. In this post, we will analyze the reasons why PT is thought to be a better source of revenue, as well as certain situations that can demonstrate the inequities and inefficiencies of property tax in developing nations.

Before we begin, it is important to note that an integrated land solution can help you manage all aspects of land administration, including electronic taxation and field data collection. More importantly, it helps authoritative agencies realize the importance of land tenure security, which you can read more about in one of our blog posts.

Pros: How Property Tax contributes to a Country’s GDP

Although it can be collected through various means, land tax collection is typically done on a yearly basis, on the value of the land. Given below are a few advantages that have led to the promotion of land tax in developing nations –

This form of taxation is regarded as more efficient versus other forms of taxes like consumption tax since resource allocation is not impacted due to its imposition. Also, land tax is levied on wealth instead of productive task completion, so it doesn’t impede productive incentives, thereby encouraging more efficient utilization of land

Land or property tax is considered as equitable due to the fact that the owners of land and capital are typically those who are comparatively wealthy. This results in the burden of tax being borne by those earning a higher income.

Property tax is typically considered as a steady and dependable source of income for local governments. This is because it is bound by geography and paid by local residents who are restricted in terms of mobility. Moreover, land cannot be moved, so land tax collection is a comparatively simpler tax for agencies to determine and apply on properties, even despite a lack of administrative capacity in some of the areas.

This form of tax is much more visible to those who pay it, giving it a unique potential to provide grounds for compromise between taxpayers and governments with regard to income and public expenditure. As a result, local authorities are held more accountable.

There are a few cases where the ‘good’ tax almost turns into a ‘bad’ tax, due to inefficiencies and discrepancies. Such cases include factors like the tax base type, the evaluation method used for the revenue base, and disparities in the overall implementation of the tax throughout regions.

Inefficiency due to Improper Tax Base

The base for land tax typically includes land and buildings, but using mobile properties for this purpose can lead to inefficacy, as this impacts resource allotment. Since the tax base is no longer immobile, it could also wrongly influence the purchasing decisions of businesses that utilize comparatively more property, slowing down development by restricting the construction of new projects.

Dysfunction due to Substantial Difference in Tax Rates Across Regions

If certain localities are taxed lower than others, taxpayers may want to move to such locations. Land tax collection can be affected by this as it could gradually reduce the market value of properties in high tax regions, leading to losses in tax revenues.

Inefficacy due to Significant Difference in Tax Administration and Implementation

Even if tax rates are somewhat similar among regions, mere discrepancies in implementation are enough to cause a significant impact on resource allocation. For instance, taxpayers living in regions with weak implementation are likely to face lower tax burden, in comparison with regions with stronger enforcement. Such variations are sometimes created from differences in capacity among localities or politics.

Uneven Income Redistribution due to Disregard

It is vital to take into account the income earning capacity of land owners, especially cases where senior citizens or those without predictable income sources form a percentage of the taxpayers. Failure to consider can lead to an unstable income reallocation and diminish the wealth of taxpayers over time.
This is especially an issue in developing countries that have an inadequate capital market and where other means of accumulating wealth like stocks or other financial assets are nearly non-existent.